Lesenjača as named the Wooden bike is a masterpiece, which was completed in May 2013 by son who had an idea and a father as a joiner, in his own firm 4mk, with a lot of wood experience. At first it was just an idea with the following question if I can and could. There was a following asignment by a school teacher and Mike started procesing the idea. He started working on a huge project and with a little help of his father and an amazing product was invented. The wooden bike was a big hit everywhere they showed up. In school Mike got a special reward for inovative wood incomplishment. The bike was presented in ''Cankarjev dom'' on the event ''Čar lesa'' (the wonder of the wood). In the Autumn it is going to be presented in City museum of Ljubljana together with 5200 years old bike found in famous Ljubljana's marsh. 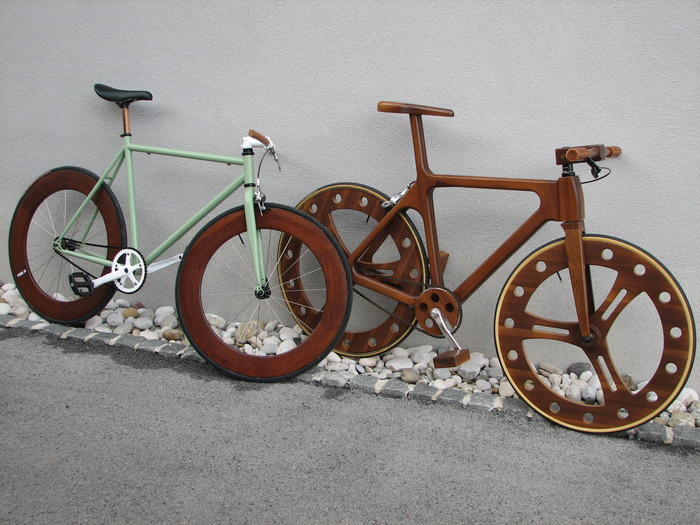 At first look we would say that the Wooden bike is only an exhibit, but Mike made it usefull almost on every route. The bike has now driven more than 1000 kilometers.  It was also tested in France where they drove it on the roads od Tour de France, where the bike got huge attention and curiosity by the spectators. The Wooden bike was also presented on the veteran world cycling championship and the public reactions were even better. 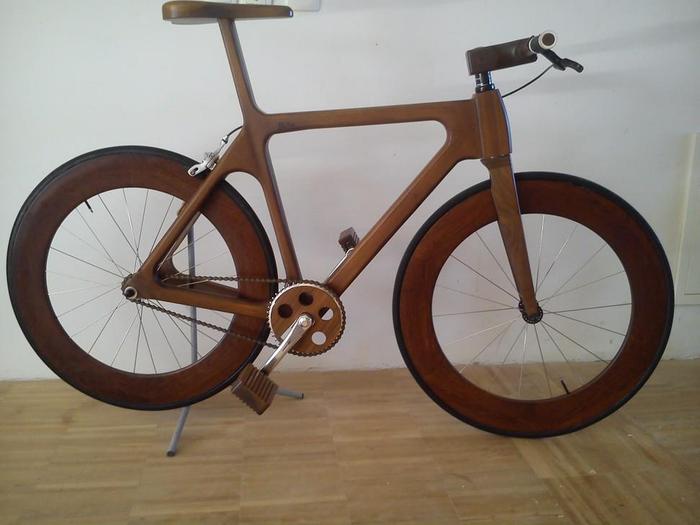 Depending on the reactions, publicity and demanding about the bike from abroad, father and son decided to make it even bigger. With some luck even patented it. And now maybe a small school project of a 17 year old boy, who has a pasion for wood and bicycling, with a bit of your help can become the next big thing on the market. 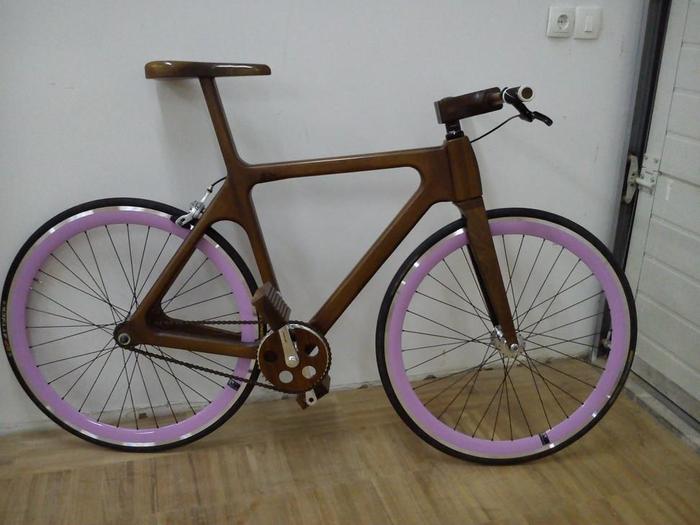 THE CRUTIAL STEPS FOR BUILDING THE WOODEN BIKE

STEP ONE: The wooden bike was drawn in Autocad. The wheels were designed into the frame of the bike. From mediapan the sample was cut on CNC machine. A wheel and two components of frame were first. After thet the example of the frame was built.

STEP TWO: 1,5 mm walnut veneer was cross glued together with Tinberbont waterproofed glue. It takes 25 mm^2 of veneer for one bike. After that you have to adjust the angle of  forks and glue them back together. On the frame was used the technique of manual milling and then made the groove for the brakes.

STEP THREE:  With the router were made holes in the frame for the hub, crank and front forks. From walnut wood was made a sit with the exactly dimensions of a normal bike sit. It was made with jigsaw and a lot of hand work(frinding and milling on the upper edges of the sit). 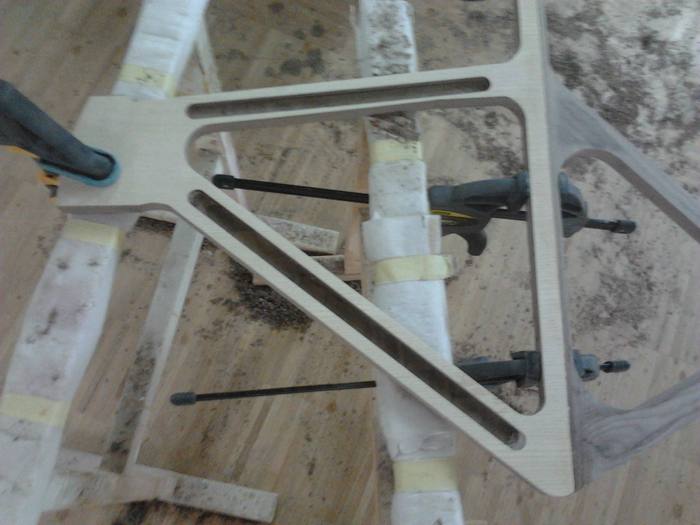 STEP FOUR: This step is started by attaching a hub to the wheel. The hole in the wheel is hubed. The wheel is straight, so on that point the wood is glued together by the purpose of covering the whole hub.

STEP FIVE: The edges on the frame were processed by manual milling-wheel R-16;R-3. 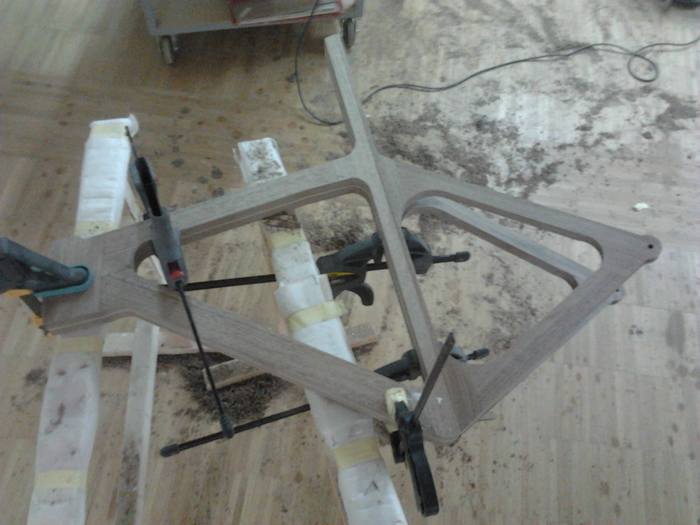 STEP SIX: The front forks were boosted with because of gravity force. The attachment of the forks is under a certain angle. The rudder was drilled out and joined with the forks. 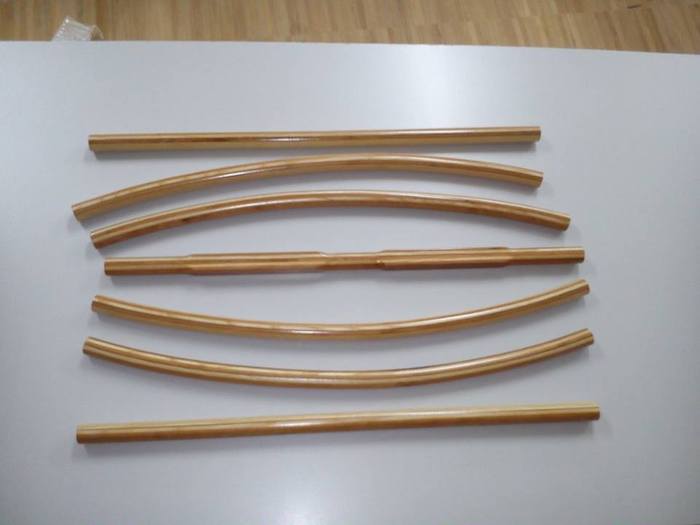 STEP SEVEN: Cycle valve was made from a piece of wood and with horizontal drilling machine the hole was made for the valve and helm by the purpose to attaching them to rudder. They are both from one piece of wood. 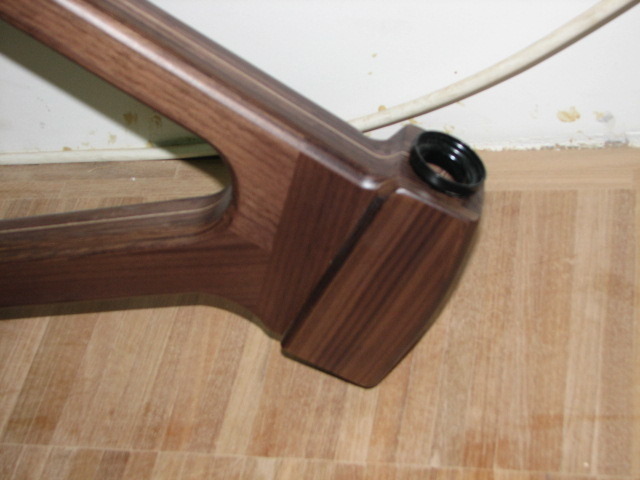 STEP EIGHT: Every component was well grinded and painted with polyurethane lacquer seven times. Matte lacquer is for the most natural look as it can be. 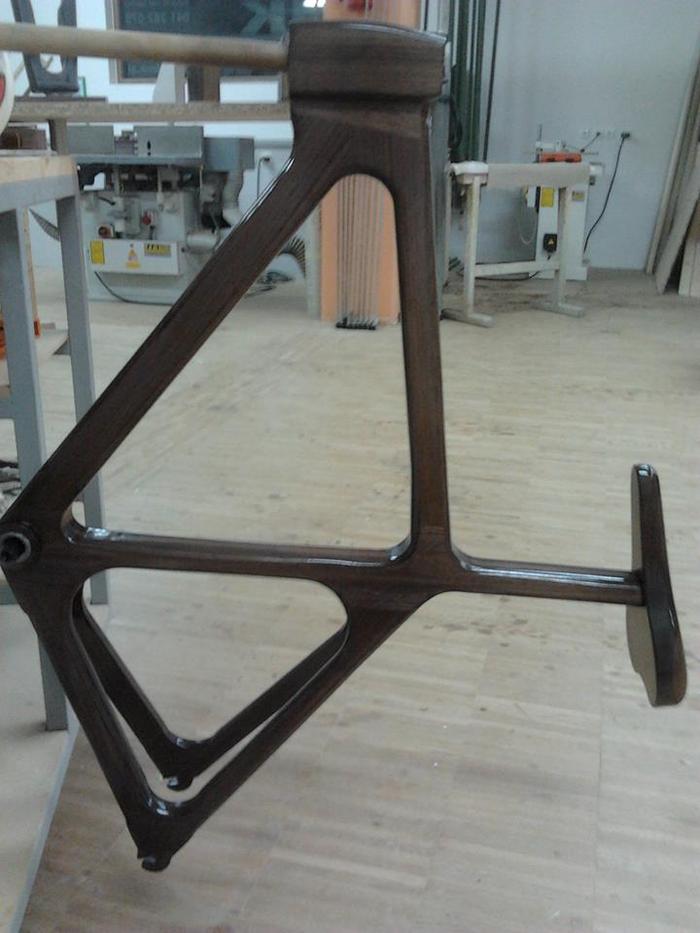 STEP NINE:  When all of the parts are dry, the Wooden bike is put together and the pedals are covered in wood. 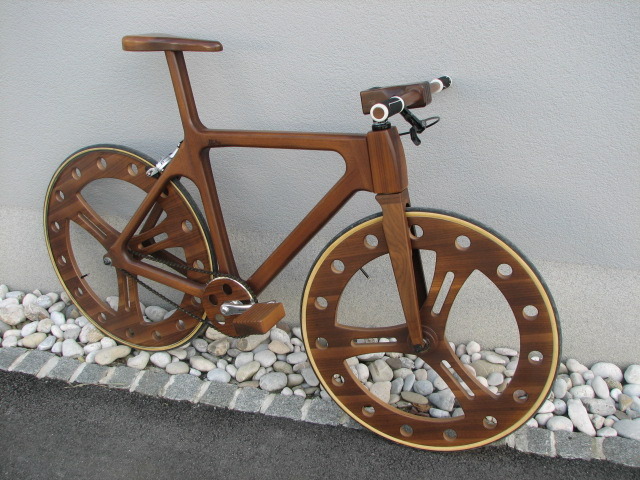 -TYPE OF WOOD : AS YOU WISH